The science of ergonomics involves designing and arranging things so that people can use them as efficiently and easily as possible. When ergonomics is applied to CNC machining the primary focus is on improving productivity and safeguarding the machine operators.

Here are a few examples of how Gosiger Automation builds ergonomics into its systems.

Obviously the chief consideration is worker safety. Manually lifting heavy parts causes operator fatigue, strain and potential injuries, even when using equipment such as gantries and chain falls to assist placing heavy parts into position. Additionally, maneuvering these weighty parts can easily cause damage to the part or the machine tool. A properly designed system using a robot arm can easily and safely load and unload the part over and over again with no loss of time and motion. Thus the operator is spared the effects of dealing with the heavy parts, while productivity is greatly improved, as the robot never becomes fatigued or takes a break from its loading and unloading routine. Click here to see a video of a Gosiger Automation designed cell that uses a Fanuc r-2000 iB robot with a vision system loading and unloading a 100+ pound part delivered to it on an automatic conveyor.


Even smaller, lighter parts present ergonomic problems best overcome with a robot. A machine operator who is constantly opening and closing the machine tool door, lifting and placing the part into position, then removing the part and loading another is performing repetitive motions that can take their toll on the person’s joints, back and extremities. At the same time, fatigue leads to slow downs in production and the potential for accidents. As seen in this video, a family of parts can be robotically loaded and unloaded, placed in an inspection fixture, automatically checked using a Renishaw Equator and, using software to analyze the results, make tool offsets all without operator intervention.


All machine tools require periodic maintenance or other services, as do accessories such as chip pans and coolant tanks. Being able to do so in an automated work cell quickly, efficiently and safely requires a design that keeps the robot arm out of the way and allows the operator to access the work area without concerns that the robot will start up unexpectedly. A small robot arm may be mounted on a specially designed base that pivots or slides out of the way to allow machine tool access. Larger robots may be mounted a distance from the machine tool that allows easy access when the robotic arm is retracted. The arm is then extended during operation. A series of safety interlocks prevents the robot from operating when someone is in the work zone.

For example, a cell may have an enclosure that requires the operator to push a button to request access to the work zone through a locked door. If the robot is engaged in an operation, it will not allow the door to open until the cycle is complete and the robot arm has retracted. At this point the operator can safely enter the door and the robot is prevented from making any movement until the operator exits the work area. In another example, a robot mounted on an overhead crane services multiple machine tools. Again, the system is programmed to enable the operator to enter and work on a machine tool cell not currently being serviced by the gantry-mounted robot, while the robot continues to load and unload parts from the other machines. The robot will not enter the workspace of the machine being serviced, so the operator can proceed without concerns.

The common denominator in all of these examples is that each automated cell was ergonomically designed for both optimum performance and worker safety. This is true of every system designed and installed by Gosiger Automation.

Robot Arm on Base

The rendering above shows an automated work cell that includes a small robot arm mounted on a base that slides the robot safely out of the way for machine tool servicing. 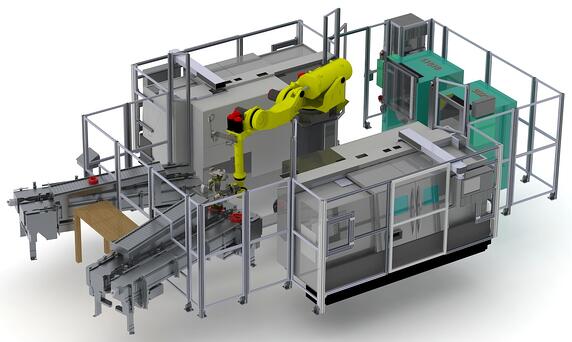 This factory automation system uses an enclosure fitted with interlocks that disable the robot arm to allow safe entry by the machine operator.