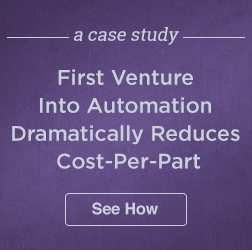 Bill Goodman, President of Inland Tool & Manufacturing, Inc., saw little opportunity to benefit from factory automation. “Along with our production stamping and light assembly businesses, we produce individual prototypes and tooling, or small batches of parts in our machining operations,” he explains, “So automation really hasn’t been much of an issue.”

Things changed, however, when Inland began making production runs of a family of parts for heavy-duty cable clamps used on slings attached to derricks for loading and unloading freight, and in the lumber industry. That’s when they decided to investigate how applying factory automation to this repetitive process might save them time and reduce labor costs. They chose an Okuma Captain L-370MWBB CNC lathe as the centerpiece and worked with Gosiger Factory Automation to create a cell that integrated an LNS Quick Load Servo 80 bar feeder, inbound and outbound parts conveyors, and a Fanuc M-6iB/6S robot to handle parts.

The Okuma lathe can run parts from bar stock provided by the LNS bar feeder, or machine slugs loaded by the Fanuc robot from the inbound conveyor. In both instances the robot unloads the finished parts from the machine’s sub spindle and places them on the outbound parts chute.

According to Goodman, “Gosiger worked out all of the details and got each piece to communicate with the others. It was a very satisfactory installation and the Gosiger Factory Automation people were all knowledgeable and professional throughout. Before we had this cell installed we had one operator dedicating 100% of his time to the process. Now the operator only spends about 30% - 40% of his time on the cell and the rest on other work. That’s a big savings.”

To learn how Gosiger Factory Automation can save you time and money, contact Gosiger today.